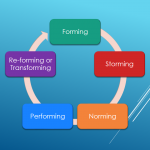 Bruce Tuckman in 1965 proposed a model of group development with four stages: Forming, Norming, Storming, Performing.  He suggested a choice after the fifth, of either Transforming or Reforming, which some have interpreted as a fifth stage.  If the group continues at that point, it has entered a new Forming stage, and the cycle continues.